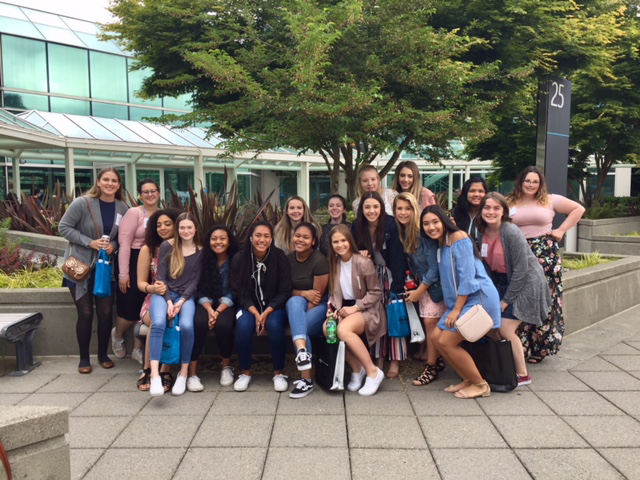 On June 7th, 2018. 85 girls from Garfield HS, Fife HS, Mt Rainier, and Sapanaway Lake HS arrived at Microsoft to learn about the tech industry. With a short introduction from Pepsi, the girls were ushered in to a room full of laptops where Chandler, the speaker, began the program and led the girls through a step-by-step tutorial on coding. From animating turtles, to creating fireworks, and playing Tetris, the girls were able to use their knowledge to explore the world of coding and create works of art.

After the coding workshop he girls hear from a panel of women who came from all walks of life and different backgrounds amazed all of the girls (and their chaperones). From Angela who has Dyslexia and talked about growth mindset, to Katarina who recently moved from Portugal, and Sarah Potter, who is managing the engineering side of gaming. All of these women serve to inspire and promote the need for women in the tech industry. Last but not least was Pepsi. Pepsi grew up in South Central L.A. and was a low-income student. Pepsi overcame her past and earned 3 degrees in 3 years!

The girls enjoyed lunch and had the opportunity to interact with the panel of women. Microsoft arranged for a variety of women ranging from engineers to client services. Not only was there variety in the jobs they held but the women were also very diverse. The representation of different nationalities and the very different paths they took that led them to Microsoft inspired our girls.  Viorica Northcutt, Sarah O’Leary, Catarina Macedo, Sarah Potter, and Angela Hession were amazing and stayed long after the panel finished to answer the girls’ many questions.

Thank you to everyone at Microsoft for putting together this great event.

"I liked hearing about everyone's experience and how not everyone had the same background. It inspired me to see women role models in coding and engineering."

"I admired how they all had a varied background; not just lucky people, but hardworking."

"Coding inspired me because it was cool and I felt accomplished and good after."

"One of the highlights of today's event was that I got a hands on activity that helped me decide whether I would be interested in this career. This event made more more interested in computer science."