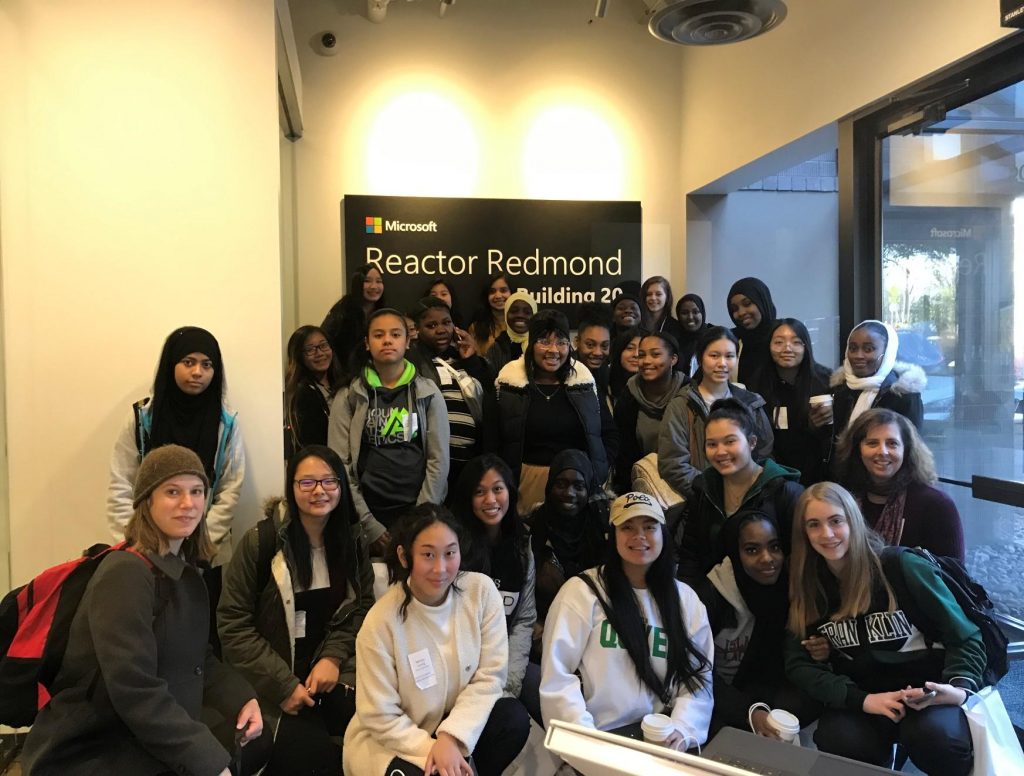 On December 4th, 2018, young women and non-binary students from Aki Kurose MS, Ford MS, Franklin HS, and Tyee HS visited Microsoft’s Redmond Campus for a Coding Workshop. There, they spent the day with women in technology careers, learned how to do simple coding and had ample time to network and engage with the professionals on a meaningful level. To begin the day’s activities, Chandler Baker, Software Development Engineer, guided students on how to log onto the mobile computers and begin programming a turtle to move around the screen.  By using a series of simple commands, the turtle was able to draw a box and then a variety of shapes such as flowers. 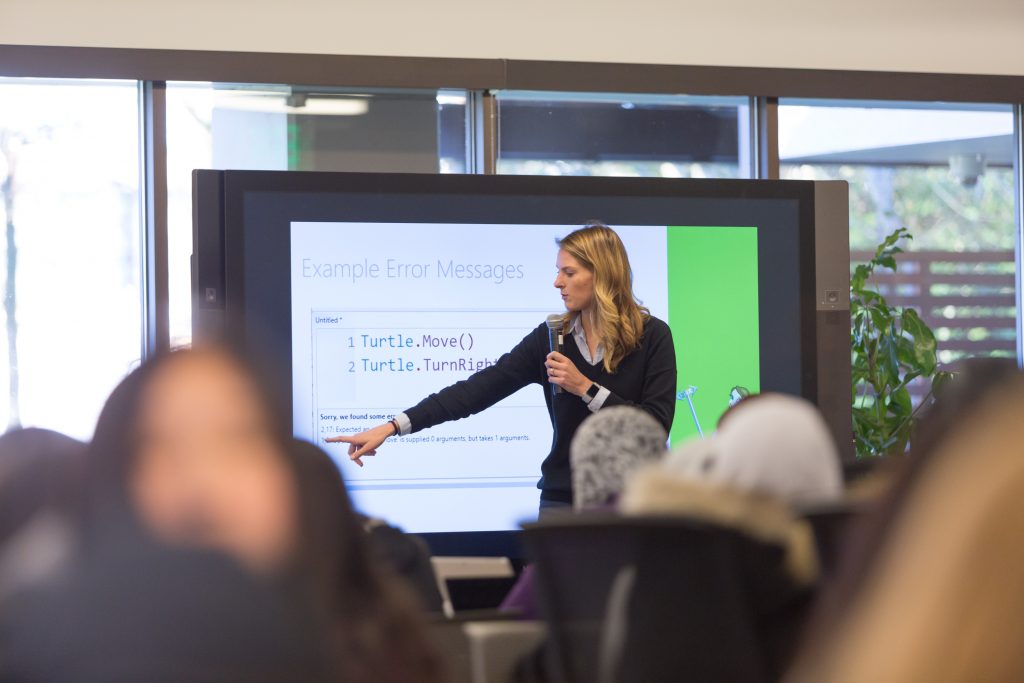 As students gained confidence moving through the lesson, students were able to manipulate parts of the code to change the line color, background color or speed.  During this time, three Microsoft employees including Mary Beth Thome, Grace Mac Jones and Rutha Nuguse were helpful in encouraging Franklin students when their coding sequences ran into errors and assisting them with figuring out how to code some of their creative ideas. 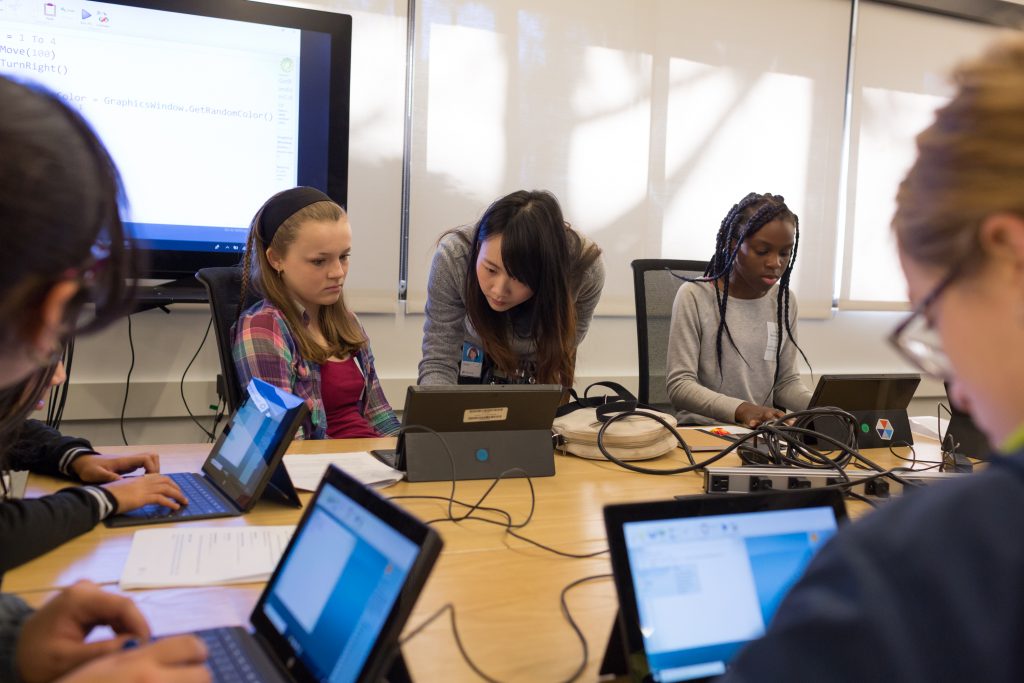 Students, some who had never had the opportunity to experience coding before, had a chance to explore and ask questions in a safe and supportive space. The students really enjoyed getting to try coding in this environment. A Tyee freshman commented that “the highlight was when people were so nice and staff helped us with the turtle game and even got to play the game!” One Franklin student wanted to write their name in block letters across the screen, and Rutha gave her hands-on help to draw the first letters of the name. Every student followed the instructions provided in their packet, allowing some students to progress more quickly if they were ready to do so while others coded more slowly.  The reward of seeing their turtle draw beautiful shapes and colors kept their interest and enthusiasm and made coding accessible to all. 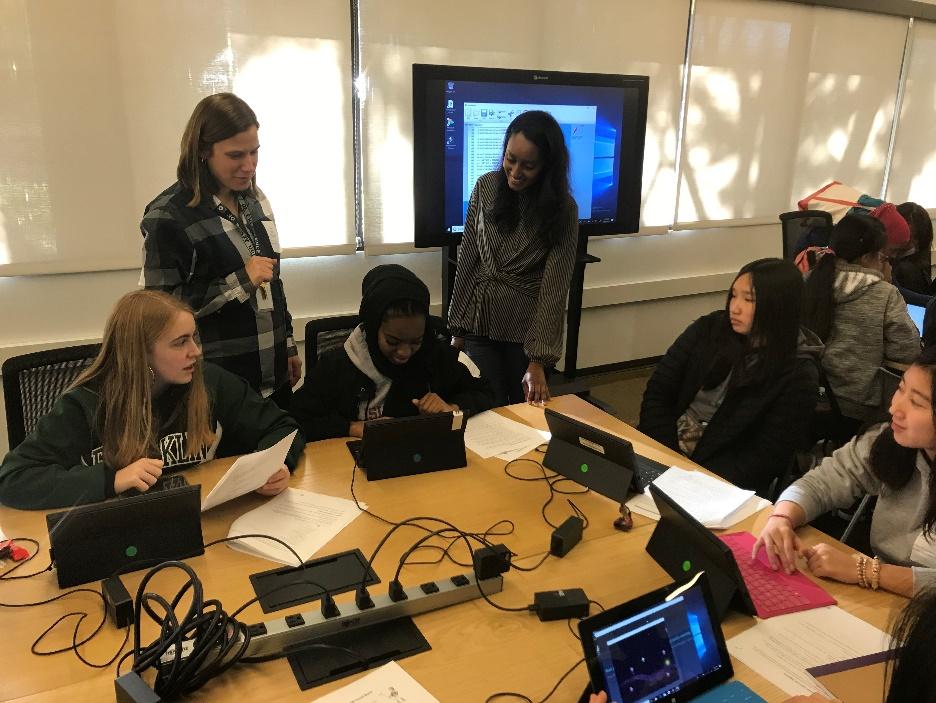 For lunch, students enjoyed pizza and drinks, and appreciated the thoughtful food options available to make their dietary needs.  It was fun to try out the games too!

Finally, seven Microsoft female leaders shared their own career journeys, successes and challenges with students in a question and answer panel facilitated by Kristi Yankacy. Themes that emerged included asking your boss what you need to do to be promoted, being courageous and interviewing for the job you want, finding ways to lower your stress and take care of yourself, and not being afraid to go back to school to pursue additional education or degrees to enhance your career options. 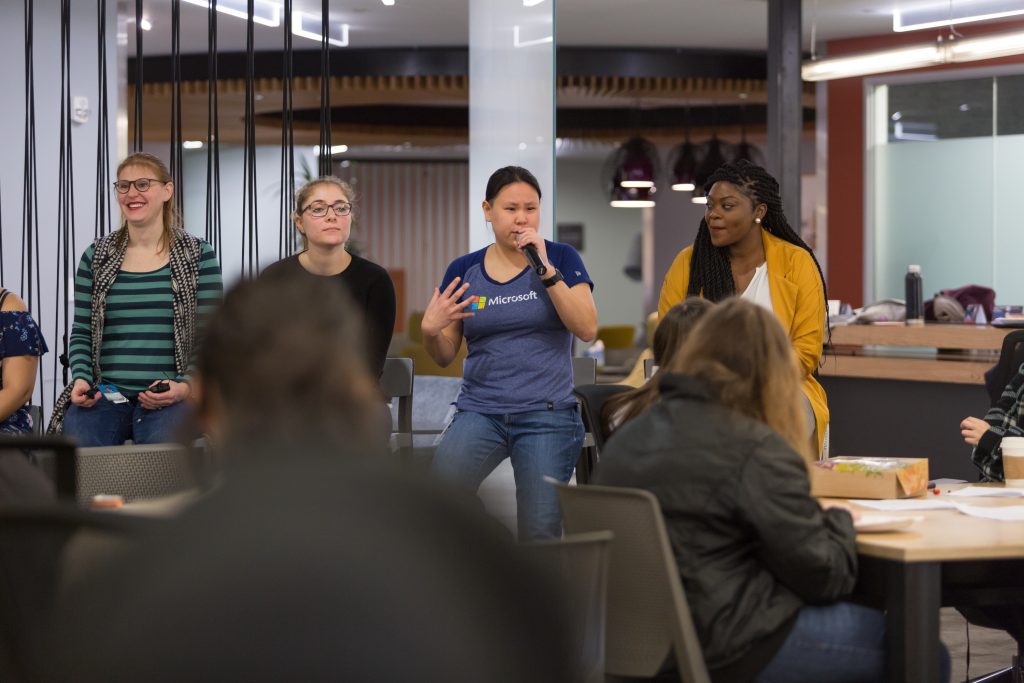 Students found the time that they spent at Microsoft was made most meaningful through the interactions they had with the staff that had volunteered their time to spend part of their day with the students. A senior at Tyee High School said that she “enjoyed the panel because it inspired [her] to keep working harder and believe in [herself]”. Students began to imagine what it might be like to pursue a career in technology, with the opportunity to hear about the celebrations and challenges of the women who have come before them and have paved the way. In a field that is dominated by males, the professionals that spent the day with the students were able to show them how they too can break through the barriers and challenges that exist while trying to get into the field of technology. 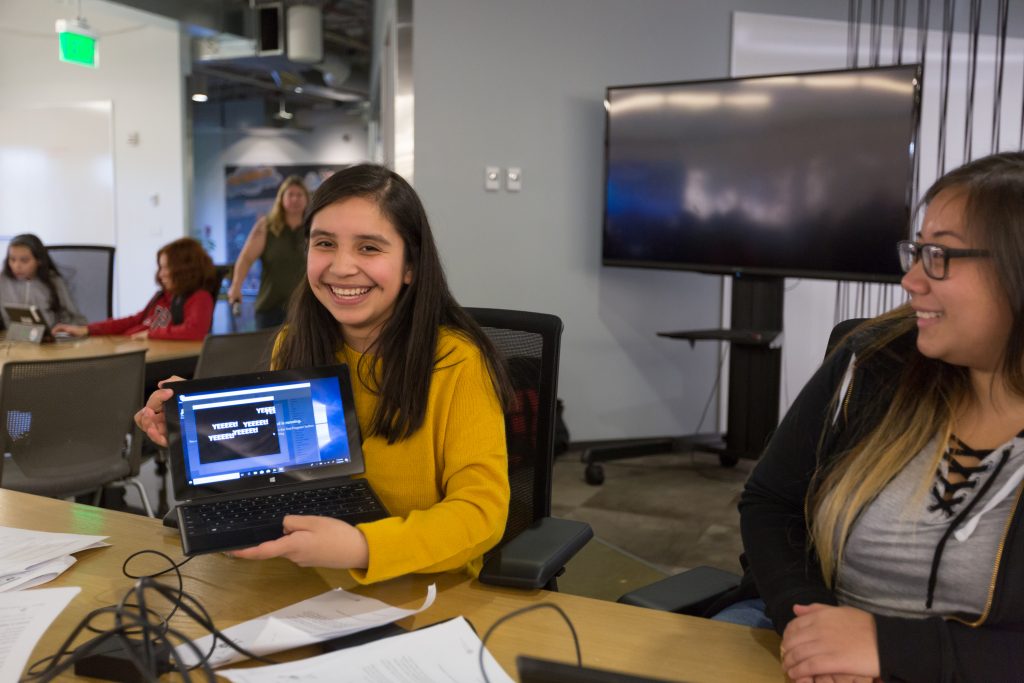 Before leaving, Microsoft generously gave students gift bags with swag including a notepad, Microsoft pen and other items. Students were appreciative to have had the opportunity to explore and imagine a future for themselves within the field of technology.

Many thanks to the staff at Microsoft who made this a memorable event for young women! We were happy to see our students so engaged and inspired by this field trip experience.

Here’s what the students had to say:

“I enjoyed that the panel speakers were people I could relate to and it inspired me to invest time into coding or technology, more because it is always changing and coding/technology is becoming more diverse.”

“I enjoyed learning how to code with Small Basic. This event inspired me to work on coding.”

“I was inspired by how many different jobs you can have and still work at the same place.”

“I enjoyed the panel because it inspired me to keep working harder and believe in myself.”

“I enjoyed learning more about coding, and this has really helped me to further my interest in coding.”

“What I enjoyed was when we coded. What inspired me was when they told us about why they like their jobs.”

“I really enjoyed hearing other interests that the speakers have in tech, and it has inspired me to download Small Basic.“

“The highlights I enjoyed today were that we were participating in Small Basic coding. This event inspired me on not giving up and not letting other people tell me what I’m capable of;  I can do things if I practice.”

“I enjoyed learning about the possibilities and I want to work harder on my goals.“

“The highlight of today’s event was talking to the panel of women in tech. It made me more motivated to pursue a career in business administration.”

Students from Aki Kurose Middle School express their thanks to the volunteers at Microsoft:

“Thanks for your help and for showing us how to code!”

“Today I learned a lot about Small Basic. Thank you Microsoft for providing this to us it was very pleasing. I really appreciate you for taking your time teaching us about coding. I would go to Microsoft again if I could, it was really fun.”

“I would like to thank you for taking time out of your day to give us an amazing experience. It was really an experience that opened my eyes to the endless possibilities I could grow into, no matter what I do I am sure that I will remember the trip and use the knowledge provided. Coding was really fun. I didn’t even know Small Basic existed, and it’s a no-brainer that I will use it later on.”

“Thank you so much for letting us come! It was an amazing opportunity and I enjoyed it immensely. I especially liked when we were able to make our own mini code! I have never done it on that app (Small Basic) before, and I found it simply incredible and a great way to learn how to code.”