The panel consisted of 3 speakers; 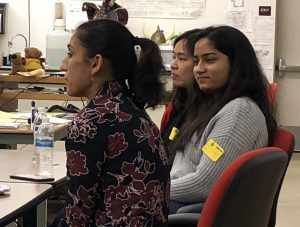 The host Mary Rustia started the discussion by welcoming everyone and asking the girls why they thought we were meeting to encourage them, young women, to go into STEM careers in particular. The theme of “You want to live in the Bay Area, you need to make 100K” was brought up. STEM careers are the fastest growing, highly paid and in high demand in the Bay Area. Ms. Rustia then asked what percent of these careers are currently held by women.  The girls were shocked to learn that women were less than 25 % in some engineering fields. Ms. Rustia then stated that these future Viking graduates were going to change that.

Each panelist then each introduced themselves and highlighted their educational background and current job placement.  Many of the girls wrote on their Event Survey that they enjoyed hearing the women different stories. A Junior girl shared on her survey how she was literally crying that she failed her calculus test and was inspired by these women talking about learning from your failures and not giving up.  A Freshman turned in notes with a list of tips; Try new things, Give it your best, Build Social Skills, Have a sense of Confidence, Make a change/difference, Look for Mentors, Don't lose sight of your goals.  All 18 girls chose “Made me more interested” verses “No change in my interest” on their exit survey.

Supporting the idea of gaining many skills and being positive about the skills you have, we had the girls turn to each other and discuss what skills they currently had and evidence they have of that skill.  The speakers then asked groups of girls to report out on their discussion. There was discussion about asking for help and letting it be okay when you don’t understand. Mention of how the girls will get through some difficult classes like Calculus by asking for help and looking for positive support groups.  Another theme of women needing to have to ask for what they need. One of the speakers shared how she has never been given a raise in salary or promotion unless she asked for it. The other 2 speakers confirmed that women in general tend to struggle with what you deserve or what you have earned. 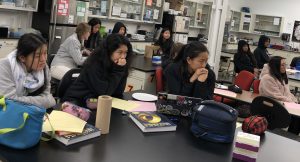 The event ended with the whole group wanting to take a group photo.  There was a positive atmosphere and feeling of comradery. A group of the robot team girl members also asked the speakers for their contact information and if they were interested in mentoring some of the girl members.

The next day, I personally met with two of the Latinas who listened to the panel.  They reported how much they appreciated knowing that these women talked about not having confidence and being shy in high school.  They were inspired that these women joined groups like the debate team in high school or Rotary Club later in life just to gain confidence in speaking.  Other seniors in my Biotech class were very impressed and inspired that some of the speakers had twelve more years of education and the girls were just finishing 12th grade.

Thank you IGNITE Worldwide and the panel for your time.  You were truly inspiring to the girls in many ways.

It inspired me that success can come out of failure.

I enjoyed that there was a sort of solidarity in here.

Encourage myself to build my self confidence so i can be successful in STEM.

I enjoyed their honesty, like faking confidence. I personally relate.

Hearing all the different ways that women overcame their mental and confidence barriers, which is something I'm struggling with right now.

Hearing that they pursued what they want to, inspired me to work harder to achieve my goals.

They inspired me to have more confidence.